Posted on February 14, 2016 by festivalforromance

Deadlines to Submit your Screenplay, Novel, Story, or Poem to the festival: http://www.wildsound.ca 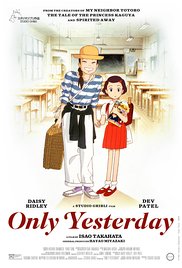 ONLY YESTERDAY is a 1991 Studio Ghibli film which was generally produced by Master Hayao Miyazaki. Takahata also directed the well-known and loved THE TALE OF PRINCESS KAGUYA and GRAVE OF THE FIREFLIES. Studio Ghibli is known to be in financial trouble, so any reworking of the studio’s animated features is a huge welcome.

Though one wonders of the reason ONLY YESTERDAY is the film chosen for the reworking. It is immediately noticeable that the film is so unlike the favourites of Ghibli Studios the most notable being Miyazaki’s HOWL’S MOVING CASTLE, PONYO, MY NEIGHBOUR TOTORO and SPIRITED AWAY. There is an absence of Japanese folklore and mythical creatures. Magic, is present though in a different form…